It has been announced that Gary Player is to be the captain of South Africa’s first Olympic golf team competing at the 2016 Rio de Janeiro Olympic Games. A couple of years ago Gary heard about some of the good work being done by KeNako Academy and he took the time to come through to George to see the KeNako facility and the program for himself. It is fitting that he has been honoured as the first captain of the SA Olympic Golf Team in Rio – he is South Africa’s greatest ever golfer but he also won the Brazilian Open in Rio in 1974 and his win included a career best round of 59!

As can be seen from his words on the picture, Gary Player was hugely impressed with KeNako Academy! Whilst at KeNako Gary interacted with the students. He is a wonderful ambassador for golf and for South Africa. Not only is Gary an inspiration when he talks but he also has some amazing tricks. He is able to hold 2 clubs out in front of him with a straight arm, the clubs held only between his forefinger and his middle finger (with no thumb supporting them) and he challenges anybody else to see if they can do this!  The students certainly couldn’t!! 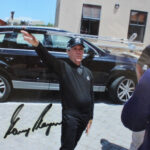 Take a careful look at Gary’s 2 fingers holding the clubs – no thumb support! An amazing trick that no student could match! 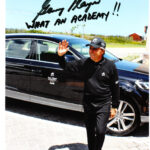 Gary’s comment after his visit says it all… ‘What an Academy!!” 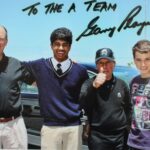 Gary has known Head Coach Roger Wessels for many years – since Roger started as a touring professional in the 1980’s – and Roger has played in the Gary Player Invitational as a guest professional on more than one occasion. Roger remembers with fondness a time when Gary was giving him a bunker demonstration and how, after Gary had sunk his first bunker shot, he took a second ball and said to Roger that he should watch again just so that he did not think that his first shot was a fluke – Gary duly holed the second bunker shot as well!!